Overseas Basketball Housing: What is it like? (Real Life Examples with Photos)

Whether living with three other teammates in a 250-square foot apartment, or relaxing in a spacious 6-floor mansion, you can expect your overseas basketball housing experience to come in all different shapes and sizes.

A difference in housing expectations goes hand-and-hand with the cultural differences experienced in overseas pro basketball.

So while you may have grown accustomed to a certain life style, other parts of the world have their way of living and operating in day-to-day life.

So let’s take a quick look at what to expect when dealing with overseas basketball housing.

how does overseas basketball work with housing players?

Regardless of the country, region or market, overseas basketball housing typically works like this:

Generally speaking, overseas pro basketball teams will almost always be responsible for covering the bill when it comes to housing and lodging its foreign-born (import) players while the majority of its local (national) players will have their own housing arrangements already in place.

That means regardless of your level in overseas basketball, the expectation is generally that you will have all of your lodging expenses paid for by the club that is employing you.

The reasoning for this is pretty obvious when you think of it too.

With foreigners coming into the country to play, they likely have:

That is why it is simply expected that overseas pro basketball clubs will take care of this process for import players coming to play in their country.

This can come as a good and bad thing.

If you have lived by yourself for the past 5 years and now you’re suddenly sharing a one-floor 400-square foot space with 3 other teammates - that could be an adjustment.

On the other hand:

Maybe you would enjoy having company seeing as how you’re in a new country, culture, climate etc.

But instead they stick you in an apartment far away from the rest of the team/city.

Both are very possible.

Ultimately it comes down to personal preference.

Key point to remember throughout this blog and your overseas basketball career:

Unless you have some serious leverage and bargaining power with the club you’re negotiating with, it will be very tough for you to convince the team seriously of your requests.

Overseas basketball is a buyer’s market - meaning there are no shortage of players who want to play professional basketball.

That means teams essentially hold all the bargaining power, especially over entry level/rookie players attempting to get into the game.

So unless you have:

…then it will be pretty to difficult to negotiate your preferred living arrangements.

For that reason, I always tell players to be mentally prepared for whatever.

Make sure you have another outlet in case your living situation is something you’re unhappy with.

That way, you’re not just constantly annoyed at home because that can snowball quickly onto the court.

(I give some real-life examples I’ve seen my teammates succeed with here).

Whatever it is, may sure it puts your mind at ease because seasons with crappy housing arrangements drag on and can ultimately lower your performance.

where do you live when playing overseas basketball?

As far as what players can expect for the living unit itself in overseas basketball:

As you can imagine the state of these units vary considerably.

I once played on a team where the club housed 3 of our national players in the team locker room.

Each had a mattress on the cement flooring and a few personal belongings.

They were literally living out of the gym like a couple of rats.

It was painful to watch.

Meanwhile, one of the imports was living by himself in a 500k 3-floor house complete with a pool, maid and balcony view.

So when thinking where YOU fit into the equation, consider a few key factors:

But regardless of the type of unit, if you’re lucky enough you’ll be situated in a place close to the:

…so that your life is as seamless as possible.

You’ll likely have some sort of transportation stipend, these could include:

what are the living conditions like in overseas basketball?

While the housing arrangement themselves are almost always covered by overseas pro teams, overseas basketball players can also expect hydro, utilities, WiFi and some amenities to also be covered by the team employing the player.

When I say utilities, I am mainly referring to two things:

In terms of what amenities a team could cover, we are looking at:

One of the biggest things overseas players forget to think of beforehand is how fully furnished is the place?

This is where many teams can fall woefully short - especially for beginner players.

And often times it is the most basic and elementary items you don’t even realize make your life more comfortable back where you live.

Here is a list of demands I made to a club in my 3rd year of professional basketball.

It’s in Spanish but I told them I’d be leaving by the week’s end if I didn’t receive: 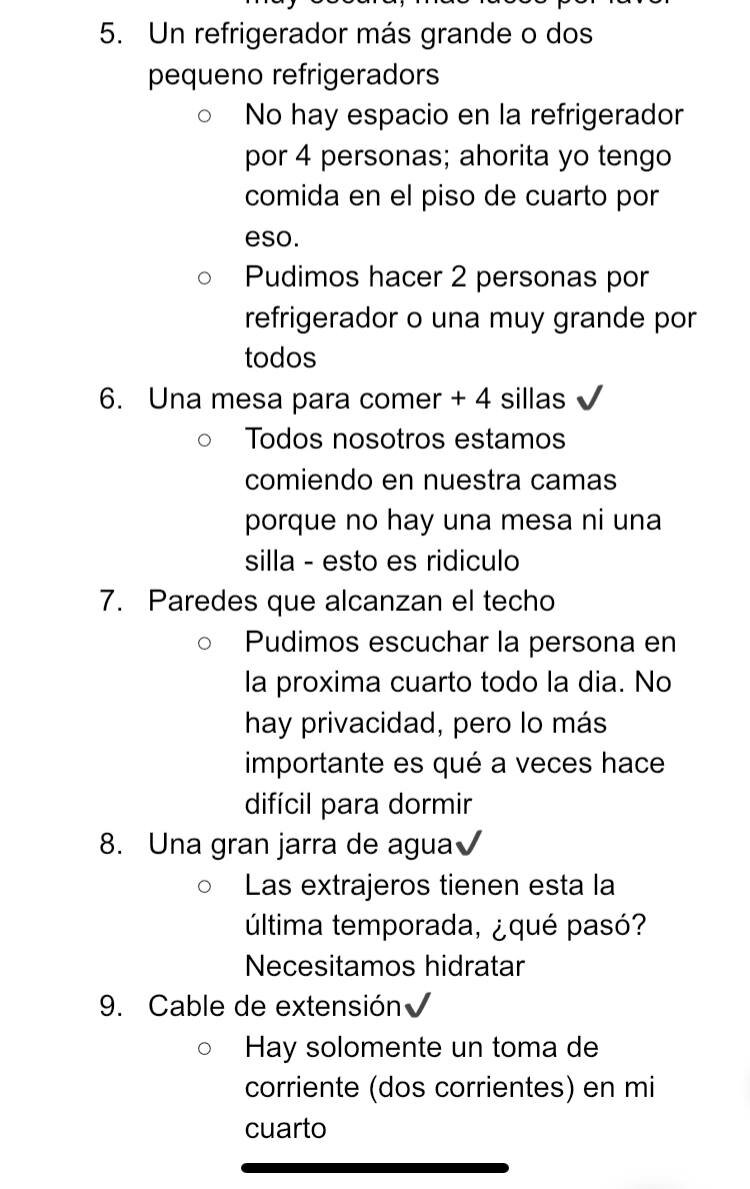 The issue is - especially if you’re playing in a developing country - many of these items may be seen as luxuries rather than necessities by the standard of living in the country.

That is why there will always be some sense of culture shock when you are playing overseas basketball.

Nonetheless, be respectful of your demands to the club and explain how you getting those items will make you more comfortable.

A happier player = a better player.

And that’s ultimately what they want (albeit for as cheap as possible).

Do you live with your teammates in overseas basketball?

Unless explicitly requested otherwise by an established overseas basketball player, pro teams will almost always place its foreign players together in a single housing unit as a way to cut costs in the club’s financial budget.

Sometimes the pairing of players can be very reasonable - as in a two bedroom apartment houses 2 people (max. 3 if someone sleeps in the living room).

Other times, it’s clearly unsuitable as was the case when they tried to stuff 3 players into a team locker room.

Again, the beginning overseas players will be most susceptible to this type of foolishness.

As you get more established you can begin to make more demands.

Now, in my fifth-year as an established pro, I demand a single house to myself or I’m not coming.

How was your overseas basketball housing experience?
Where were you living and what was included in contract?

Jose Colorado is a five-year professional basketball player helping others achieve their goals of pro basketball through a proven, research-based approach.